Hey all, it’s that spooky time of year again, so I thought it’d be fun to put on our Hillary Clinton masks and talk about making freaky sounds with some pedals.  Sounds fun, right?  Right.

The inspiration of this idea came from Tera Melos guitarist, Nick Reinhart.  If you don’t already know, he’s kind of a pedal mystic or sage if you will and has in the true Halloween spirit, made recordings full of spooky sounds on guitar.  Check it out above.

I wanted to share a spooky soundscape I did and talk about a few pedals that are perfect for haunting your house, cabin, spaceship or any other place that is bound to contain evil spirits and/or aliens.

Moog Mf-102 Ring Modulator – every sound that comes out of a ring modulator can be nasty, dirty, scary, and panic-inducing if you want it to be.  LFO sweeps, crazy harmonics and electric bellgongs, robot wolf howls…Ring modulators are a pretty common sci-fi film sound effect that I’m sure you would recognize.  Most robot voices are just ring modulators.  Think of it as a robot larynx, I guess.

Iron Ether Frantabit – bit crushing sample rate reducing is another way to conjure some gnarly sounds from your guitar to honor your favorite dark lord.  This thing does fuzz, static, strange theremin-like frequency sweeps, total annihilation.  You can make an already scary sound even scarier by making your amp sound like it’s dead. Or back from the dead and you have to smash it’s fucking brains out.  (If you want to know more about this pedal, check out my review of it.)

Visual Sound Liquid Chorus – the Liquid Chorus ironically sounds beautiful and makes everything shimmer.  Chorus (or any modulation) is great for creating suspense, especially if you set the depth, width, and rate controls high for some wobbly swirlyness.  The faster the swirl the more anxiety you can impart on your dog, as well as any ‘subjects’ you may have strapped to that operating table in your basement….oh, that was a secret?  My bad.

Keeley Absolute Wurst – octave pitch shifting pedals are perfect for getting doomy low octave bass lines and those high-pitched terror inducing noises that sound like babies and cats fighting in the night during a full moon.  Plus, this guy can sort of emulate a pipe organ, which is kind of the epitome of evil sounding music. (Review here.)

Anyway, here’s my contribution to the genre of scary guitar: https://soundcloud.com/sexypigdivas/sets/freaky-sounds-on-guitar/s-RJbXC

All these pedals can be used in a musical, subtle way, but today that isn’t the point.  Mood and texture is what it’s all about if you want to get freaky with pedals.  Now go out there and make Satan proud!

See ya in Hell!

Until next time.  Love, 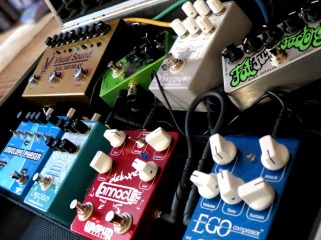 My current pedalboard set up

I’d like to welcome you to the new official home of The Pedal File.  This will now be the place where I can talk about pedals and whatever the hell else I feel like…mostly pedals though.  New features of my blog include a gallery where I’ll post photos of my pedalboard(s), new pedal acquistions, trips to cool guitar shops, and other pedal-related antics.  I also added a video/sound gallery for my pedal demos and where you can listen to my music.

This site is a work in progress so please comment and let me know what you think.  Please also let me know if there’s a pedal you’d like to see demonstrated in a future post.

Oh, and if you’re here because you think this is a page about bicycles, get a real hobby, like playing with effects pedals!!!

I’m just kidding, bikes are cool too.  Pedals are cooler though.  Just sayin’.

Recently my wife and I attended a Reverend Guitars/Earthquaker Devices Q&A session at Guitar Riot where she won a Disaster Transport SR through their giveaway raffle.  (You should totally check out Guitar Riot if you live in or near NE Ohio.  Thanks again to them and EQD!!)  We of course were excited and began exploring it’s knobs about a week or so ago.  I thought it’d be cool to compare the Disaster Transport SR and Visual Sound Dual Tap Delay.   Check out the video.

It’s sound is clean and crisp, the controls are simple and nicely laid out, and every part seems to be high quality – like you could forget it was on a chair and your fat ass could come crashing down on it and not even a knob would snap off.  Anyway the Dual Tap Delay is a great hi-fi delay that is still able to get weird with analog-type self-oscillation, rhythmic stutter delays, and time-warp effects.  Visual Sound makes a point that this pedal is made to be intuitive without the need to read the manual.  Read it anyway, it’s short, explains everything well, and has cool suggested settings to get you started.

If you like to run stereo and/or have the amps to do so, this pedal will sound amazing and with two separate delay channels with the option to make one channel dry or effected.  It’s also great just using it for reverb or chorus, and it sounds awesome on vocals.  Delay A has a modulation knob for adding a really nice chorus to the effect, from subtle to vibe-like.  Both delays feature the ability to switch to manual control of the delay time if you like, and they sound really cool if you turn the knobs while a signal is repeating to create a warping effect.  Both also feature time division knobs that are set by the tap tempo button.  There are at least 16 ways to combine these divisions for sweet ass syncopated rhythms.  The Dual Tap has a really pleasant, warm sound with crystal overtones that will make your guitar shimmer like fairy dust without being too brittle (unless your tone is all treble and sucks to begin with).  It works well with distortion (not as well with fuzz or buckets of gain).  I’ve gigged and recorded with this pedal for a while though and it’s solid.

Tweakables:
stereo output – internal switch to make 2nd output effected or dry
tap tempo button – 4 different time divisions in tap mode [quarter note, eighth note, dotted eighth, & triplet] on both channels
modulation – adds a watery chorus, ever so gentle vibe-y-ness to the repeats (only on 2nd channel)
trails – internal switch to turn this feature on/off
tone knob – like the tone knob on your guitar, but for the repeats
repeats knob – number of repeats
level knob
-also has an external input for tap tempo control
(Extra point to Visual Sound for designing custom metal soft-switch buttons that make the pedal super easy to turn on/off and are really really sturdy.  You don’t have to stomp them very hard at all, but this pedal has some weird desires and doesn’t mind the abuse.   I like to wear stilettos when I play mine.)

Despite having only owned this pedal a short time, it quickly has become apparent how awesome and amazing it truly is.  This delay is more lo-fi sounding, and it genuinely recreates the warmness and drifty nuance of a real tape delay.  The controls are also nicely laid out (check out the manual as I’m pretty sure this is one of the only pedals in EQD’s line that includes one.  ‘Nuff said).  I wouldn’t recommend sitting your fat ass on this one as it’s a little lighter on materials.  Not to say it’s not durable or well-built because it is.  This pedal can handle abuse, just most likely not more abuse than an innocent pedal should usually receive.

The ‘Senior’ as I like to call it, or ‘Seniorita’ when I’m drunk, is great at making you sound like a wall (of sound) or like you’re way out on the edge of the universe listening to space sounds bounce off the edge (of the universe) and back into space while they swirl around planets and trail after comets and whatnot…  It can sound like an Echoplex, but with more character in my opinion.  The DT SR creates atmosphere that can put you in an instant trance.   Whether you want to play complex riffs with added dimension that inspires or be a noisey noisemaker and control peoples’ minds, these knobs can do it.

Again you can use the delays separately or together.  Delay A has a really nice phaser/flange-type modulation at low settings and an almost pitch shift/ring modulator sound at high settings of the Depth and Rate knobs.  Delay B has a sensitive Reverb knob that goes from none to a generous amount.  Mix the two together for deeply satisfying washes of atmosphere.  Standout features of this pedal are the bleed knob, the expression pedal inputs for it, and the repeats knob.  First, the bleed knob allows the two delays to run in parallel mode (two separate delays) or series/parallel mode (delay A feeding into delay B).  Its like Delay B is delaying the delay from Delay A.  And adding reverb.  Got it?  Good, stupid!  This allows for all sorts of combinations and trippy rhythms.  You can also experiment with the knob somewhere in between and get even more sounds.   Furthermore, you can have expression pedal control over this function.  You can also control the repeats of Delay A with an expression pedal for those times when you want to get all Johnny Greenwood and throw it in and out of self-oscillation.

Tweakables:
modulation – (Delay A) depth/rate controls speed and amount – goes from subtle chorus-y to phase/flange to tidal wave pitch bends to ring mod-like super fast tremolo to pulsing alien spaceships to….you get the idea.
reverb – (Delay B) can be tweaked to induce all sorts of different sensual reverb sounds.
time – changes speed of delay from reverb-y slap back all the way to pretty spaced out repeats
repeats – changes amount of repeats.  Expression pedal control on Delay A
mix – changes amount of dry vs. wet signal.  Noon is 50/50, anything past that causes a volume boost.  It’s a good thing.
bleed –  allows the two delays to run in parallel mode or series/parallel mode .  You can feed delay A in to delay B without having delay B switched on for a cleaner rhythmic delay.
switching – This pedal features a cool switching system.  The outputs of both delays are always connected. This allows you to have trails by always leaving it on bypass or to use the bypass switch as the master on/off for true bypass.

Both of these pedals are worth their respective prices.  It just depends on what kind of sound and features you prefer for delay.  If you like something a little more familiar yet extremely versatile go with the Dual Tap.  If you like to experiment, find new sounds, and are a fan of analog tape echo, you won’t regret owning the Disaster Transport SR.  If you’re like me and are obsessed with having as many sounds as possible, buy them both!  Either way, both companies offer some form of lifetime warranties for their pedals so rest assured you’re making a good investment with the products proudly produced domestically by the good patriots of Visual Sound and Earth Quaker Devices.  If Jesus played guitar, he would use these pedals.  Thanks for reading.

Friends of The Pedal File